Integrating the most productive region in the country

The railway network under MRS management has a significant strategic weight for the entire national economy precisely because of its geographical layout: it establishes a connection between producing regions, large consumption centers and four of the largest ports in the country (Rio de Janeiro, Itaguaí, Sepetiba and Santos). There are 1,643 km of railroad, which corresponds to approximately 6% of the national structure and in which around one third of all national production is transported, figures that give the exact notion of the system’s level of productivity. 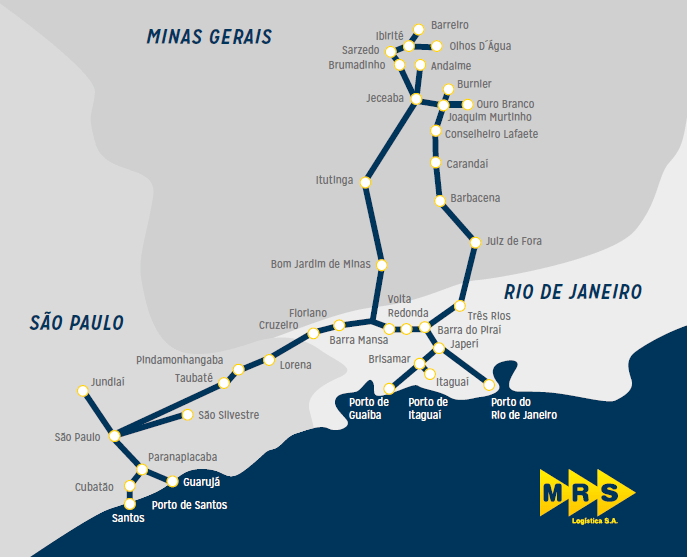 Since MRS creation, another 200 km of railway line have been built, approximately, in projects for doubling or expanding capacity. A prominent project in this regard was the completion, in 2014, of the stretch known as Segregação Leste, a 12 km line between Manoel Feio and Suzano, in São Paulo, which allowed the end of the sharing of cargo trains with those of passengers (managed by another company) in the region. These expansions represent both gains in productive capacity and in Safety.

MRS owns about 20% of the national railway fleet, including more than 18 thousand wagons and 730 locomotives. The company has stood out for its constant renovation and development of new assets and for the levels of availability and reliability of the rolling stock. 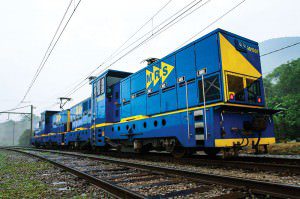 Among these projects, two deserve special mention. First, the seven locomotives created by Swiss manufacturer Stadler for MRS operation in Serra do Mar, in São Paulo, known as Cremalheira (picture on the side).

These locomotives have an additional traction and motor braking system, provided by a third track, in the center of the track, and a set of gear wheels, which allow to overcome an inclination of up to 10%, a considerable ramp when it comes to trains. These machines, in full operation, are the most powerful locomotives ever built in the world.

MRS has also innovated with respect to its wagon fleet. Also in São Paulo, with a focus on serving the general cargo segment, the Double-Stack Penta Articulated wagon was developed, which doubles the transport capacity of containers, in relation to traditional flat wagons. The company is also a pioneer in the development of high capacity and performance ore wagons, thanks to partnerships with some of the main manufacturers of railway material in Brazil and worldwide.