A railway of international standard 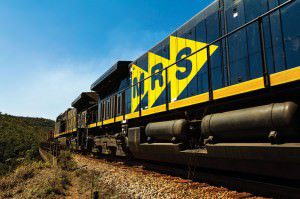 MRS Logística is a railway cargo operator that manages a 1,634 km network in the states of Minas Gerais, Rio de Janeiro and São Paulo, a region that concentrates about half of the Brazilian GDP. The company was created in 1996, when the government transferred the management of the national rail system to the private sector, and today it is among the largest cargo railroads in the world, with production more than three times higher than that registered in the 1990s.
Our network connects regions that produce mineral and agricultural commodities and some of the main industrial parks in the country to the largest ports in the Southeast region, which gives our operation a differentiated economic importance. Almost 20% of all that Brazil exports pass through the MRS tracks, which concentrates, despite the relatively short length of its network, one third of all cargo transported by trains in the country (in 2013, more than 156 million useful tons load).
In addition to the transportation of cargo such as ores, finished steel products, cement, bauxite, agricultural products and containers, among others, MRS offers broader logistics solutions, including the planning and development of multimodal solutions (which use more than one means of transport), as well as customized rail services. The company currently has indicators comparable to those of the most efficient and safe North American and European railways, in terms of energy efficiency, transit time, asset availability and reliability, safety and productivity, and stands out for its intensive use of technology and a culture of innovation

A major challenge for all national railways is the effective management of the level of mutual interference between trains and communities, and the safety of people who live close to the railway. Year after year, MRS has managed to advance this management, thanks to investments for solutions in cities and for the mobility of communities and a constant work of awareness and guidance, with a focus on combating recklessness. Our actions on this front are detailed in the Safety channel.

MRS intends that the power of social transformation of the railroad will have amplified effects on our society. The company maintains several dialogue and promotion of well-being and development programs for the families of its employees and the communities that house the railway, in addition to an extensive portfolio of projects of social investment. It was also the first national railway certified by Ibama and maintains constant environmental management programs, focusing on dealing with impacts on cities. Given the relevance of its economic contribution, the company also maintains a very refined risk management, economic-financial control and corporate governance system. For us, growth is nothing without the vision of a better future for everyone.